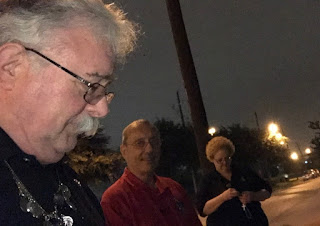 40 Days for Life- Dallas was off to a soggy start at 6am in front of the South Dallas Planned Parenthood.  We had all traveled through rain just to get a light sprinkle at the vigil site, but the more we prayed, the harder it stormed.  One of the Knights quipped that it was like our 40 Days vigil was being baptized!

Some of us had been to the Kickoff the night before; others had been to a Hike for Life meeting to finalize details for this weekend.  And at least one Knight plans to be at the vigil for all twelve hours today.

The Kickoff Rally was one of the best we’ve ever had.  Shawn Carney, a founder of 40 Days for Life, was the speaker, sharing amazing stories of God’s grace.  He told of one vigil that, year after year for ten years, had not seen one baby saved.  How trusting these people have been, that God wants them to persevere and that He can use for good whatever they give Him.

This last campaign, a woman showed up with her six-year old daughter.  She wanted the volunteers to know that when she was pregnant, she had come to abort this child, but she had left because she saw them praying for her.  For six years, a little girl has been alive because of their sacrifice and Christ’s mercy.

Our host was Chris Wheel from The TurnAround Agenda, who welcomed us and prayed with us for life.  He prayed about the need for all of us to stand together  -- for everyone to be a part of the “us-ness,” a Texas word!, as we work and pray for life.

May God greatly bless this 40 Days for Life vigil and bless all His people who have answered His call!

By: Susan Platt, Dallas Campaign Director
Posted by 40 Days for Life-Dallas at 6:18 AM