South Dallas Planned Parenthood is in a quiet location, surrounded mostly by medical offices.  Yesterday afternoon, we had three people who drove past, giving us thumbs up and calling out, “Good job.”  A worker from one of the medical labs walked over to talk for a while, saying they were glad we were there.

And an older lady pulled up to tell us that she could hardly stand to go to her doctor because having Planned Parenthood next door was so distressing.  She said, “I miscarried two babies, and I can’t believe that someone would intentionally…”.  She couldn’t finish her sentence.  We asked her to pray and she said she would.

The Feast of the Guardian Angels was this week.  How wonderful it is that we each have a Guardian Angel watching over us, aiding our prayer, and presenting our souls to God at death.  Angel means messenger, and the angels not only take our messages to God, but they also bring His messages to us.  Padre Pio spiritually adopted lots of sons and daughters, and he would ask them to send their Guardian Angels if they were in need.  He would send his Guardian Angel to pray for them too.

In Send Me Your Guardian Angel, a book about Padre Pio’s relationship with angels, the author relates a story about one of Padre Pio’s spiritual children, Cecil Humphrey-Smith.  Involved in a terrible car wreck, Cecil was seriously injured.  A friend went to the post office to send a telegram to Padre Pio, letting him know and asking for prayers.  When he turned the telegram in at the window, the clerk handed the friend a telegram from Padre Pio which said he would be praying for Cecil’s healing!

Months later Cecil was able to make the trip to see his spiritual father and asked how Padre Pio had known so quickly about the wreck and how the telegram had gotten there so quickly.  Padre Pio asked him, “Do you think the Angels go as slowly as the planes?”

Sometimes our Guardian Angels are sent to ask us for prayers.  Yesterday, this young man came to the prayer vigil because he said he felt called to pray the Rosary. He came just when we needed him.  Thank you, Guardian Angels. 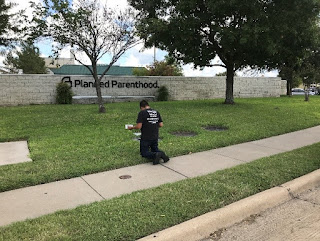 Guardian Angel Prayer for Friends
Guardian Angel,
watch over those whose names you can read in my heart.
Guard over them with every care
and make their way easy and their labors fruitful.
Dry their tears if they weep;
sanctify their joys;
raise their courage if they weaken;
restore their hope if they lose heart,
their health if they be ill,
truth if they err, repentance if they fail.  Amen