The Fall 2013 40 Days for Life campaign has begun -- 40 days of praying, fasting, standing vigil and reaching out to the community.  On Tuesday evening, families and friends gathered in the park across from the vigil site to kick off the campaign with music, prayer and inspiring speakers. 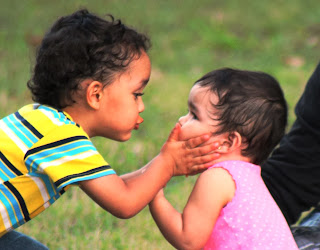 At midnight, the "First Hour", folks gathered, to begin the 24/7 prayer vigil outside the Southwest late-term abortion facility, including St. Anthony Church parishioners, who adopted Wednesday, the opening day of the campaign.  (Some hard-core prayer warriors even went to the sidewalk after the Rally, i.e. before the official midnight "start" of the prayer vigil!)

On Thursday, the second day of the campaign, came the "every day pledge."   A man is planning to pray at the vigil site every day -- every day of the 40-day campaign.  Yes, in past years he prayed for an hour or so on the day that his church adopted. This year, however, God called him in a special way and he responded, "Yes, Lord. I will go."

On Friday, we prayed for the families.   A couple with a growing family and some difficult crosses to bear was contemplating abortion.  A father (Christian man who also has a large family) just happened to be praying at the abortion facility with his own family when the couple arrived for their first abortion consultation. He reached out to the couple. And they decided not to schedule the 2nd abortion appointment.  Praise God!   The praying man and his wife are planning to break bread with the couple who chose life, and their children are looking forward to getting to know each other.

<><
Update:  A second baby has been saved from abortion at the Southwestern late-term abortion center.  Praise be to God!!