Reflections on the Kickoff Event... and a Push to Save Lives

It is Day 4 of the wonderful 40 Days for Life campaign, which kicked off at midnight on the early morning of Wednesday, September 22.

Reports thus far in Dallas from regular prayer volunteers are that traffic is WAY down at the late-term abortion facility, where our peaceful, prayerful vigil continues.  Praise God!  We are already seeing the incredible results from prayer...and that is, for an abortion center that typically sees a great amount of traffic, people are no doubt being moved to reconsider their decision.  Even if we have not yet heard "first hand" of how people are being moved, we know that in the Kingdom of Heaven, it is making a remarkable difference.  This is ultimately our goal -- to change & convert hearts for life, and as a result, we will save lives.

For a moment, I want to back up...and share a bit of the motivation & blessing going into this peaceful, prayerful vigil at the late-term abortion center.

Tuesday, September 21 -- the day of our Kickoff Rally-- began as a nice warm, early Fall day.  Members of the 40 Days for Life-Dallas team all agreed that there was something 'special' in the air....we knew to expect great things that evening, as we prepared for the largest 40 Days Kickoff Event our city has ever seen.

We gathered for lunch with David Bereit -- the National Director of 40 Days for Life (and our Keynote speaker) -- at the home of a wonderful 'life supporter.' Some of those that joined us for lunch were from other churches, faith traditions, and pro-life organizations around the city.  And we sat back to marvel at how all of these wonderful people -- who work so zealously to assist women in crisis and save their unborn children -- came together in one room to pray and ask God's blessings upon the next 40 days.  David spoke at the lunch about how we knew we could all go just one step further in our ministry to save lives -- that God had brought us all together for a time such as this -- and that Dallas was a KEY part of the 40 Days history & its future.

Most people are unaware that Dallas was the second city to take up the 40 Days for Life campaign.  Just after the founding city, Bryan/College Station, held its 40 Days for Life in 2004, Dallas decided to hold a Winter 40 Days for Life.  And we know the result of that story!!  Just a few years later -- the site of the first Dallas 40 Days for Life, Aaron's late-term abortion center -- was closed and leveled to the ground without a trace!  We kept this in our hearts, as we listened to David.  During David's talk, a light rain graced Dallas...and we continued to pray that this was a sign of blessing...and that the weather would clear for this evening's event!

After we said our goodbyes, we headed off to get ready for the Kickoff Rally  The team, as well as Knights of Columbus & St. Michael's Youth Group (Garland), arrived to start putting together the site at Harry S. Moss Park.  At one point, we stepped back and saw our plans coming to life, finally -- the stage, sound system, band, & ministry fair.  Before we knew it, it was 6:00 pm, and our start time of 6:20 pm (for praise & worship), was rapidly approaching.  Our team joined hands & prayed for God's blessing upon this event.

After announcements, Stephen Ward and his band (from the Community of God's Delight) were lifted their voices in song.  People were coming...and coming...and coming!  It was beautiful to see SO many filing in to participate!  Before we knew it...Co-directors, Lauren Muzyka & Joanne Underwood, were on stage, welcoming all to the Dallas 40 Days for Life Kickoff Rally.  Lauren reminded everyone that beginning that night, Dallas was starting its 40 Day journey of (1) prayer & fasting,  (2) peaceful vigil in front of the Southwestern late-term abortion center, and (3) community outreach.  Then, Pastor Ron Julian of the North Dallas Community Bible Fellowship Church opened us in prayer. 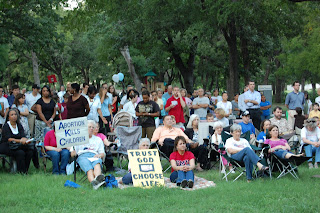 Karen Garnett, Executive Director of the Catholic Pro-Life Committee of North Texas -- our 40 Days for Life - Dallas sponsor -- welcomed the crowd, as well.  Then, we heard from Fr. Paul Weinberger, Pastor of St. William the Confessor Catholic Church, who reminded us of saints who had gone before us to lay a foundation of faith & life.  Aurora Tinajero, CPLC Spanish Ministry Director & Radio Host of "Celebrando La Vida," spoke in Spanish & fired up the crowd for life!  And Pastor Ron Julian got back on the stage & reminded us that life itself belongs to God, and it is not ours to take.

Lauren followed the speakers and gave a brief reflection about her readings on Mother Teresa -- do we love like she did, that we would go to the places where people were dying, to stand for LIFE?  Lauren reminded us that Mother Teresa saw the greatest poverty where people were unloved & unwanted... She challenged everyone to let their love move them to come to the abortion center time & again, to serve those in crisis...and that it was time to give the Pro-Life movement a new FACE through 40 Days for Life.  And with that...she introduced keynote speaker, David Bereit...

David took the stage and reminded Dallas how KEY it was in the 40 Days for Life campaign!  He told us that after several 40 Days for Life campaigns, he had a longing to see a child who had been saved from the 40 Days efforts all around the world.  Finally, he got his chance -- at a another 40 Days event, someone came up to him and asked if he would like to meet a little boy that had been saved by his 40 Days for Life efforts.  He remarked that it wasn't HE who did it -- it was the prayer volunteers, and ultimately, the Holy Spirit.  Still, the
pro-life friend pressed on..."but I bet you'd sure like to hold him, huh?"  And David described the moment he held that little boy in his arms -- as he looked at this perfect little boy, at his big brown eyes with tears of thanksgiving streaming down his face, he wondered -- how close did this little boy come to being a 'statistic'?  As David closed, he reminded us that we go to work & school for 40 hours a week... maybe we could make the pledge to do just one hour a day at the prayer vigil.  Or find the time to do just 40 hours for this campaign between now and October 31.

As David closed, candles were passed out & lit.  Stephen Ward & his band returned to the stage...and the music crew played the song "Advocate" -- a song written by Stephen, which reflected on those sidewalk counselors & prayer partners that brave the wind, sleet, snow & heat to stand for those who cannot stand for themselves.  And as our team looked out at the near 300 person crowd -- all holding their candles for LIFE -- we couldn't help but be incredibly grateful, knowing that God had gathered us all for this time, to be a light to our city & the rest of the world.

We closed with sounds of the North Dallas Community Bible Fellowship Praise Team...and we resolved to do everything we could this 40 Days, to make a difference in our city.

We will not stand for this atrocity in our city.  We will do what we can to effect change through the power of prayer, to save mothers-in-crisis & their unborn children, knowing that every life is precious.
Posted by 40 Days for Life-Dallas at 10:00 AM