Prayer is not a spectator sport

There is prayer, and then there is PRAYER.  On the sidewalk outside Southwestern late-term abortion center, we are witnessing  PRAYER.

More than 20 students from Christ for the Nations School of Spanish spent an afternoon facing the abortuary in deep unwavering prayer.  It was a personal experience for each, yet united in a communal effort, as they each recited individual prayers aloud...some with hands raised, others kneeling, others rocking, many with their eyes closed tight...oblivious to everything except the focus of their prayers.

The only breaks they took from this intensity was for the occasional prayer raised in song.  Their visible passion and fire was no doubt fueled by their keen sense of the horrors that take place inside that building everyday.  Passersby need not see gory pictures, or aggressive posters, to understand that something tragic and mournful was happening in that building.

And the prayers continue...
﻿﻿﻿﻿ Our prayer vigil coordinator Susan arrived at the vigil site Monday morning, with 15 people already there, including some of the Knights who had been there since 10pm on Sunday as part of their 24 hour commitment to Life!   She joined a group praying the Rosary, and in her own words:  "I’ve never been a part of a prayer circle quite like that.  It was decade after decade after decade, people joined the group, others rested for awhile, but the Rosary kept on, like we were battering that building with prayer.  I stopped for a break after a couple of hours, and the pray-ers went on."
﻿ ﻿﻿﻿﻿

﻿ ﻿﻿﻿﻿﻿Susan spoke to a couple who had been outside the abortion center on Saturday.  They had seen the two young women who were pregnant outside the abortion center.  One of the sidewalk counselors told them to, “Keep praying.  You have to keep praying!”  So they did!  And the two women left!  This couple was so excited about what they had seen and what God had done!
And the blessings kept coming...two priests, Fr. Joseph (just returning in from out of town) and Fr. Dankasa were headed to a retreat but stopped to pray at the vigil on the way.   Three women expressed their interest in becoming sidewalk counselors.  In all, seventy-three people had signed up to pray!...and more seemed to keep coming...there were always at least 10 people on the sidewalk during the near six hours Susan was there...sometimes around 20.
No doubt, our Mother of Mercy, heard all these "sighs, mourning and weeping in this valley of tears," and will take up these beautiful prayers to her Son, Our Lord Jesus, to convert hearts and save lives. 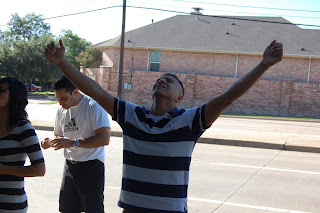