Shepherds and their flocks...

If we could see prayers, as if they were little bubbles or little iridescent orbs carried
by angels, thousands and thousands would have been seen... lifting moving, floating, covering, filling the neighborhood this past Saturday.  Bishops...pastors...youth...all ages...many cultures...many prayers

There were early morning prayer warriors already at Southwestern late-term abortion center, standing on the sidewalk...peacefully praying. Of those were: Young Serrans of Dallas, Immaculate Conception Church (Grand Prairie), Nuestra Senora del Pilar (Dallas), Couples for Christ -- Foundation for Family & Life... and others.

Up the street on Walnut Hill Lane at St. Patrick Catholic Church, Auxiliary Bishop Doug Deshotel celebrated Mass at 8 o'clock with special intentions for the end of abortion (quarterly Respect Life Mass/Adoration/Rosary Procession).  As Mass concluded, Father Josef Vollmer-Konig led the rosary procession out of the church.  Two buses filled.  Continual rosary prayed all the way to Southwestern late-term abortion center, while others remained in the church for Eucharistic Adoration until the procession later returned. 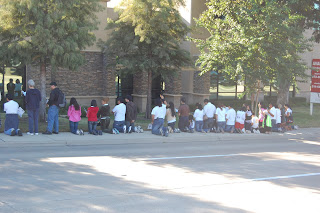 A "Jericho Walk" commenced, circling the entire neighborhood. (For those who have never heard of a "Jericho Walk", this is a special prayer pilgrimage which surrounds an area as Joshua did...praying that God will cause spiritual strongholds to come down.)  The buses arrived at Southwestern late-term abortion facility sidewalk, unloaded and joined the 40 Days for Life-Dallas prayer vigil.

The sidewalk was filled with a hundred or so (hard to tell how many...it felt like thousands of people), as Fr. Josef continued to lead the rosary.  Responses were in Spanish and English.  More songs and prayers filled the air.  When it came time for the buses to return, prayers continued, traffic was stopped and participants (still praying) filled the buses again.  The uninterrupted prayers continued as buses completed the "Jericho" circle around the neighborhood back to St. Patrick's.  Prayers continued as everyone followed Fr. Josef back into St. Patrick's church, joining those in Adoration before the Blessed Sacrament.  Benediction began. 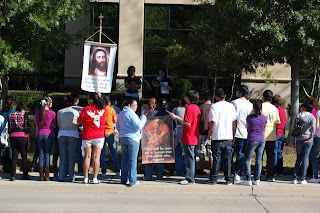 It was also 40 Days for Life-Dallas Youth Day.   Throughout the morning and into the afternoon, more prayer volunteers joined the sidewalk outside Southwestern late-term abortion center.  Over three hundred youth from Immaculate Conception in Grand Prairie lined the entrance to the Southwestern office park on Royal, covering the abortion center in their prayers.  A bell choir sent ringing prayers floating through the air.  Rosaries and songs in Vietnamese...Korean...English...Spanish...filled the air.  Standing at the far end of the prayer line, a handful of young adults from St. Francis Anglican Church kept prayerful watchful eyes (some with tears) particularly on two women who came out of the abortion center.  These two women (both pregnant) were intensely talking in the parking lot...for some time.

While all of that was happening, set-up was beginning for the 40 Days "Midway Rally" in Harry S. Moss Park across the street from the Southwestern abortion facility.  Dallas Auxiliary Bishop Mark Seitz,  Pastor Wayne Mitchell (North Dallas Community Bible Fellowship), Father Douglas Zavala (Immaculate Conception, Grand Prairie) and Carmen Pate (40 Days for Life "international") were present to speak, give heartfelt testimony, and to pray. (More details and pictures from the rally to come.)

Bishop Seitz and Fr. Douglas joined the sidewalk prayer vigil, coming from the Midway Rally across the street. Prayers continued. Bishop Seitz walked through the prayer lines, like a shepherd through his flock.  Prayers did not cease in order to greet the good bishop and he seemed happy...joyful about that. His flock was doing what they were supposed to be doing(!)...praying for the lives of the innocent victims in this facility....praying for Life...praying for conversions of hearts and souls.  I don't know if anyone noticed this, but Bishop Seitz gave all those present his blessings before he left...with added prayers for all those inside the abortion center.

They left.
Praise and Glory be to Almighty Holy Merciful God,
to Jesus Christ His only begotten Son and to
the Holy Spirit... Three in One!!!
<><
Posted by 40 Days for Life-Dallas at 11:39 PM